The independent Panel of Experts judges the prize. The Panel is a group of international experts selected from around the world to provide an impartial assessment on the technical merit of the shortlisted papers.

Each is asked to serve for up to three years to give continuity and stability to the decision-making process. Members of the current T.I.C. Executive Committee and staff cannot sit on the Panel.

Richard Burt is a former T.I.C. President and widely recognised as a leading expert on tantalum and niobium. After graduation, Richard worked in Central Africa and the UK prior to immigrating to Canada in 1977, where until 1997 he was at Tantalum Mining Corporation of Canada, first as Mill Superintendent then, from 1983 as General Manager. He then moved to Cabot Corporation, as Director of Mineral Development, a world-wide mandate, which included tantalum exploration and development projects in several countries throughout Africa. Since 2002 he has been an independent consultant with an international client list in the tantalum, tin, tungsten and gold industries. He was on the T.I.C. Executive Committee for many years, including two consecutive terms as President (2009-10 and 2010-11). He has been a Director of various junior mining companies in Canada, UK, Africa and Brazil.

Dr Elizabeth Dickey is a Professor of Materials Science and Engineering at North Carolina State University where she is also the Director of the Center for Dielectrics and Piezoelectrics, a university-industry cooperative research centre with 26 international members. Her research aims to develop processing-structure-property relationships for materials in which the macroscopic physical properties are governed by point defects, grain boundaries or internal interfaces. She is regarded as leader in the application of electron microscopy and spectroscopy techniques to understand the role of material defects on electrical and chemical transport in dielectric materials. She has over 150 peer-reviewed journal publications in these areas and has organized numerous international conferences and symposia. She is a fellow of the American Ceramic Society, has served on the Board of Directors, and was awarded the Fulrath Award by the Society in 2012. She is currently an Editor of the Journal of the American Ceramic Society and serves as a Physical Sciences Director for the Microscopy Society of America.

Since 2009 Magnus Ericsson is consulting professor Mineral Economics at Luleå University of Technology in the mining heart of Sweden. He has for decades been closely involved in developing a global mining database. He has established a reputation for developing among the best overviews of the world’s mining industry. Together with his colleagues he has mapped all of the world’s deposits, mines and mining companies and monitored their investments and M&A activity. He has over the years been involved in tantalum mining in Namibia and in an advisory capacity regarding social and community matters for a niobium project in Malawi. He is currently setting up a new consultancy called RMG Consulting, based in Stockholm. He is a co-founder and Editor-in-Chief of the scientific journal Mineral economics/Raw Materials Report, now in its 31st year.

Dr Axel Hoppe holds a doctorate in chemistry and has worked in the tantalum industry for over 25 years. He has published several papers on the subject and holds various tantalum patents. For over 30 years Dr Hoppe worked at H.C. Starck, then a subsidiary of Bayer. His last position at Starck was Head of Technical Services and Engineering Group. Dr Hoppe was a member of the T.I.C.’s Executive Committee for 10 years (1997–2007), including serving two terms as President (2001-2 and 2006-7). Currently he is Chairman of the Board of Commerce Resources, a Canadian junior mining company, and works as a consultant for rare and refractory metals.

Dr Nassar is the Chief of the Materials Flow Analysis Section at the National Minerals Information Center, USGS. Dr Nassar is a leading expert in mineral criticality assessments and materials flow analyses. Employing a systems perspective, Dr Nassar and his team examine the global stocks and flows of non-fuel mineral commodities at each stage of their life cycle in order to gain a more complete understanding of their status above ground. His most recent work on the global stocks and flows of tantalum was published in the journal Resources, Conservation and Recycling, which he presented at T.I.C.’s 58th General Assembly. Dr Nassar received his Ph.D. from Yale University where he worked on the development and application of a methodology for identifying critical minerals. Previously, Dr Nassar worked as a consultant and as a process development engineer in the semiconductors and data storage industries where he was the recipient of three trade secrets for the development of novel new manufacturing processes.

Dr Okabe’s doctorate examined the processing of reactive metals, such as titanium and niobium, and his subsequent career has included postdoctoral research with Professor Donald Sadoway at Massachusetts Institute of Technology (MIT), USA. Dr Okabe specialises in materials science, environmental science, resource circulation engineering and rare metal process engineering. Recently, in addition to the research on the innovative production technology, he has been working on new recycling and environmental technology of rare metals, such as niobium, tantalum, scandium, tungsten, rhenium, and precious metals.

Dr Zedníček’s doctorate examined tantalum capacitors and was awarded in 2000 from the Technical University of Brno in the Czech Republic. Prior to establishing EPCI in 2014, he worked for over 21 years at a major tantalum capacitor manufacturer, including 15 years as the worldwide technical marketing manager. He has authored over 60 technical papers and a US/international patent on tantalum and niobium capacitors. He regularly presented at the CARTS passive component conference and other leading events. Dr Zedníček has also contributed several articles for the T.I.C. Bulletin. 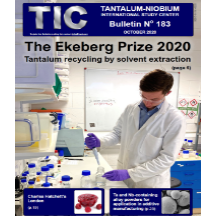 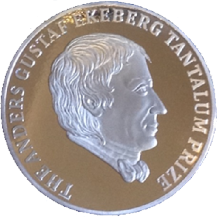 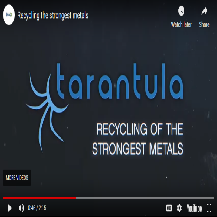